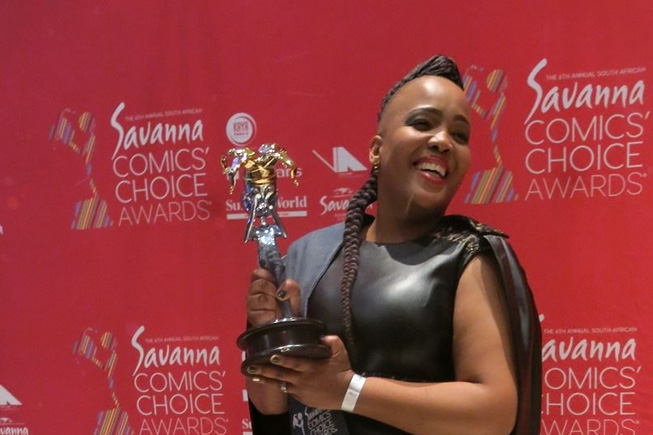 During her inspirational female empowerment acceptance speech there was twerking, laughter and tears as she took the gleeful audience, including her husband Mpho Osei-Tutu, down memory lane on her illustrious career.

“I didn’t know how much I wanted it until I won it. It means a lot and I had my sisters here with me. It means a lot because it’s a new industry and it’s growing, people need to recognise that these were guys that acknowledged me,” Morake reiterated to Sowetan LIVE after her big win.

Morake came dressed like a winner too. She looked gorgeous in a black gown with exaggerated shoulders and a dramatic cape. Her good friend Brenda Khambule designed the number.

“Waking up this morning, I just said I need to slay, you must look amazing, because I wasn’t expecting to win tonight. My stylist Brenda Khambule said to me I have this vision and I said show me this vision because I have a design in mind too. So she showed me this number with epaulettes and epaulettes are very important to me because they remind me of my mother, God rest her soul. I channel her every time I perform,” Morake pointed out.

“The cape was important too because the queen shall rule and the queen will forever rule. I also proudly wear militant because this year I came out about the rape situation because I could see that people didn’t know where to place it in my life.”

Starting this month, Morake will for the first time embark on a nationwide tour to promote her stand-up comedy.

Aside from Morake’s momentous win that happened at the very end of the show, the 2016 Comics’ Choice Awards were an all boys club; with Galane, Kagiso Lediga, Hlophe and Ebenhaezer Dibakwane winning in their respective categories.