Tumi and Vanessa to ‘Tease!’ at The Market Theatre 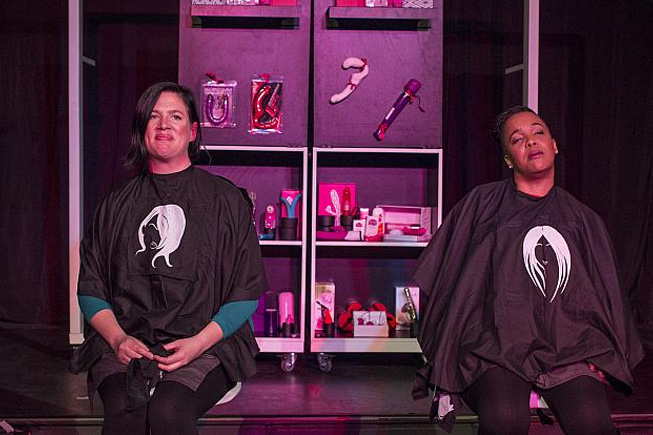 First Lady of Comedy Tumi Morake and the original ‘Cavewoman’ Vanessa Frost team up in ‘Tease!’, which premieres in Johannesburg at the Market Theatre from 16 November to 4 December.

Listed by The Herald as one their ‘picks of the day’, and described by them as “Lots of fun with more than Fringe appeal”, ‘Tease!’ enjoyed a successful debut run on the National Lottery Fringe at the 2016 National Arts Festival in Grahamstown with sold out shows, standing ovations and a Standard Bank Ovation Award.

Set in their suburban hair salon, ‘Tease!’ is an honest comedy in which Vanessa and Tumi play best friends Eva and Neo, stylists and ‘therapists’ to many a regular client, offering the audience a glimpse into the familiar world of client-stylist relations: a veritable stream of conversation, ‘skinner’ and agony aunt-style relationship advice. In an unexpected personal and professional funk, Eva and Neo embark on a journey of self-discovery. Armed with intimate client knowledge and a growing understanding of what women (and men) want – and need – these intrepid Tease! stylists launch a quiet, backroom business selling toys… of the adult persuasion.

The show is produced by theatre and documentary company Bloom & Stone, who focus on creating meaningful, accessible content. Cue newspaper promised that “’Tease!’ will titillate for sure. This show is flippin’ brilliant”! and The Herald said that “’Tease! Is surprisingly un-smutty given the subject matter and abundance of sex toys on show” – attributing this not only to the clever script, but also the “formidable theatrical skills of Frost and Morake”. Written by Jose Domingos, Vanessa Frost and Tumi Morake, ‘Tease!’ will be performed in the Mannie Manim at The Market Theatre from 16 November to 4 December 2016.